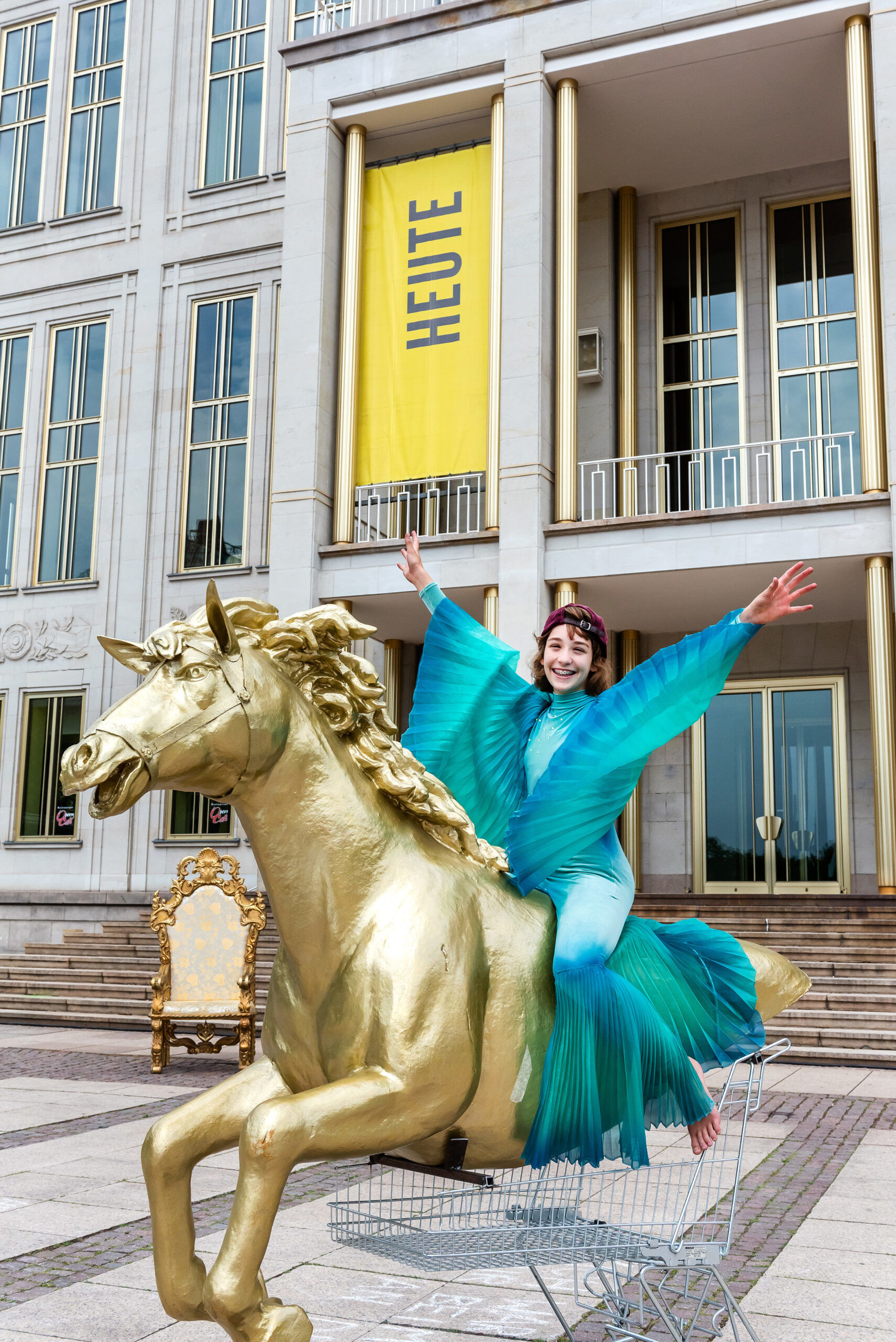 FUTURE: NOW!
Open-air-spectacle from the Oper Leipzig and Theater Titanick opens the 2022/ 2023 Opera Season in Leipzig

The future starts in September 2022: FUTURE: NOW! will take over the Augustusplatz in front of the opera, created by local children and young people. Huge machines, magical lights and music will form the prelude performance for the first season of new Director Tobias Wolff and his team at Oper Leipzig. Children and teenagers have taken their future into their own hands and have been working on their very own utopias, at the Helmholtzschool with the project partner, Theater Titanick. The one-off performance FUTURE: NOW! will include the Opera Chorus, members of the Leipzig Ballet, the Opera’s Children’s Chorus and around 200 youngsters and will take place on the 17th September on the Augustusplatz in front of the Opera house.

we wish you a happy and joyful New Year!

We thank you for generous support during our anniversary year and we loolk forward to new adventures in 2022.

We are currently planning the upcoming season. You will find more informaton on our site Tour & Tickets soon. We hope to see you at one of our shows!

Looking back at a successful season

Looking back at a successful season

We look back on a successful and exciting 2021 season in which we delighted young and old in a wide variety of places:

We say DANKESCHÖN to all our partners and supporters and above all to our loyal friends and fans. So many enthusiastic spectators is not only a great success but also a strong signal of hope that culture is possible again even under COVID conditions.

An exciting and successful 2021 season is just finishing. Now the 2022 season is just around the corner and in the coming year we have some spectacular productions with different themes and formats in our repertoire: our two new productions TRIP OVER and UPSIDE DOWN, as well as our classics FIREBIRDS, SONNAMBULO and ALICE ON THE RUN.

We are looking forward to planning the new season with you.
See you in 2022!

TRIP OVER tells the story of Lola and Ocean – two lovers in search of their identity and freedom. But the past travels close by their side and casts an ever-growing shadow over them as they set out on their road trip. The journey becomes an odyssey. The wild performance is accompanied by live music and video projections that open up a new perspective for the audience. After a successful first tour in 2021, TRIP OVER is ready for new challenges!
Further information, photos and video on TRIP OVER.

The world is topsy-turvy. Isolation is the order of the day. Borders are built and walls erected. Populist tendencies divide societies and families. Egoism and intolerance are taking over, both on an international political scale as well as in the private sphere. In its new production Theater Titanick picks up on this zeitgeist, this spirit of the time, this imbalance. After celebrating our premiere this summer UPSIDE DOWN is ready for touring in 2022.
Further information, photos and video on UPSIDE DOWN.

The dream of flying is celebrated in a parade through the city centre that electrifies the audience. Six daredevil pilots and their flying machines, accompanied by the ground crew (local amateur actors) and the French music group Fanfare Le S.N.O.B., take part in a flying competition. The pilots try to win the favour of the audience as they go along. FIREBIRDS has delighted young and old around the world in recent years. We are looking forward to captivating new audiences with our parade in the coming year!
Further information, photos and video on FIREBIRDS.

Welcome to the imaginary world! With SONNAMBULO Titanick creates a dream trip full of images. Like a sleepwalker, the spectator strolls past images of paradise and inferno in a landscape inspired by the medieval visions of the afterlife of Hieronymus Bosch.
Further information, photos and video on SONNAMBULO.

ALICE ON THE RUN

Home is transitory – Alice had to find that out that too. Her house is suddenly torn apart. Her friend the rabbit disappears. In a bathtub boat, she embarks on an odyssey into the unknown, looking for a new place to call home. The audience is centre stage with the action taking place in and around them.
Further information, photos and video on ALICE ON THE RUN.

In August and September we let our project FUTUROPA come to life.

FUTUROPA is an interdisciplinary theatre performance. It is a laboratory where the way we live together in Europe is explored. A pile of sand is deposited in the middle of the city. In just three days a complex house structure materializes out of it. This is the stage for performative sequences both improvised and rehearsed. The building will be filled with life day and night during the three days.

Audience participation will be a major role both in designing the house as well as in the performance. Some of the questions that will be raised: How do we want to live together in Europe in the future? Who determines the rules that we live by? Who is allowed to participate? How can sustainability be a guarantee for a climate-friendly life?

In front of our new hall in Leipzig a set was created in an intensive research and rehearsal phase, in which possible scenarios were improvised and different materials were experimented with. The project will be continued in the coming year with international partners from Poland, France and the Netherlands.

The Project FUTUROPA is funded by the Fonds Darstellende Künste as part of the #TakeAction programme.

Trip Over
Upside Down
Alice on the Run
Firebirds
Hochofensinfonie
Sonnambulo